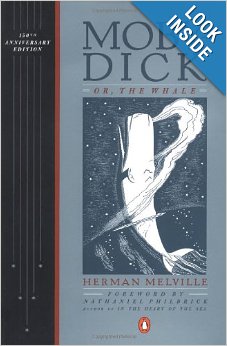 Now, this classic book is so ingrained in our culture that movies can get all deep and interesting simply by alluding to a metaphor–which is like a simile, only different–that refers to this doorstop of a book.

Like this: “Maybe I’m Ahab and he’s my white whale” uttered by Bruce Willis in DIE HARD 17: THE HAIR DYES HARDEST could change that movie from just another 120-minute shootout in a nursing home into a penetrating examination of the purpose or life, or lack thereof.

Does that make editing the first page of this thing any harder?

Not really. Bring it, Melville.

Call me Ishmael. (People have been riffing off it for so many years that those three words are invincible. Can’t touch this.) Some years ago — never mind how long precisely — having little or no money in my purse, and nothing particular to interest me on shore, I thought I would sail about a little and see the watery part of the world. (This second line is also good. It makes the narrator a smidge unreliable, which is always interesting, and gives him a motive that everybody can relate to: being poor and wanting to see the world.) It is a way I have of driving off the spleen and regulating the circulation. (On your third swing of the bat, Herman the Meville, you whiff. Nobody cares about other peoples’ spleens and such. Kiss those words goodbye.) Whenever I find myself growing grim about the mouth; whenever it is a damp, drizzly November in my soul;, whenever I find myself involuntarily pausing before coffin warehouses, and bringing up the rear of every funeral I meet; and especially whenever my hypos get such an upper hand of me, that it requires a strong moral principle to prevent me from deliberately stepping into the street, and methodically knocking people’s hats off- then, I account it high time to get to sea as soon as I can. (Whenever I read a ginormous sentence with five zillion semi-colons and commas, I reach for the red pen and turn it into a nice, short sentence with one comma.) This is my substitute for pistol and ball. With a philosophical flourish Cato throws himself upon his sword; I quietly take to the ship. (Another semi-colon, but this is the last one that gets to live.) There is nothing surprising in this. If they but knew it, almost all men in their degree, some time or other, cherish very nearly the same feelings towards the ocean with me.

There now is your insular city of the Manhattoes, belted round by wharves as Indian isles by coral reefs–commerce surrounds it with her surf. (Hate this sentence. It’s like our friend was talking to us about an interesting story, then started reciting beat poetry. Rewrite follows.) The city of Manhattoes is belted with docks and ships, like an Indian isle is encircled by coral reefs. Right and left, the streets take you waterward.

The fact this book is a classic doesn’t mean page one is perfect.

Herman the Melville is wordy on this page and he only gets wordier later on in this book, where he stops the action entirely to devote entire chapters to lectures about whale tails and such.

There’s a lot of fluff to kill, and I was pretty gentle with the word slaying. You could kill more.

Compared to most first pages, though, he does a good job of setting things up. Ishmael wants to see the world and that means sailing, because he’s not rich. So we’re in for an adventure.

How could we improve this? More foreshadowing. Maybe he mentions a friend who’s a sailor, the one who told him stories that got him interested in a life at sea, and this friend just served on a whaling ship that limped into port after getting attacked by a big whale. A ghostly white one. But his friend was drinking a lot of rum and tends to make up stories…