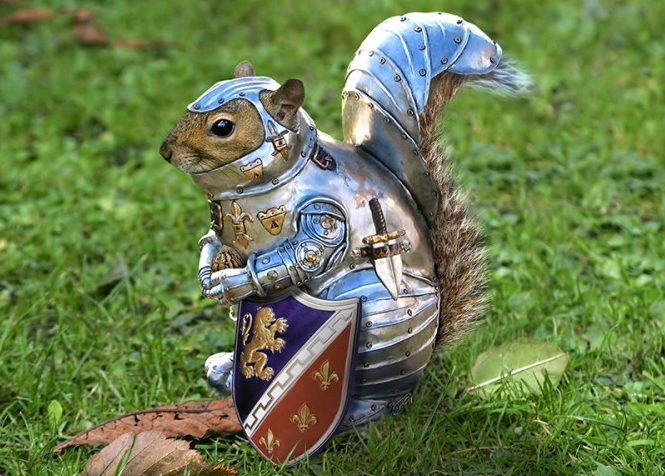 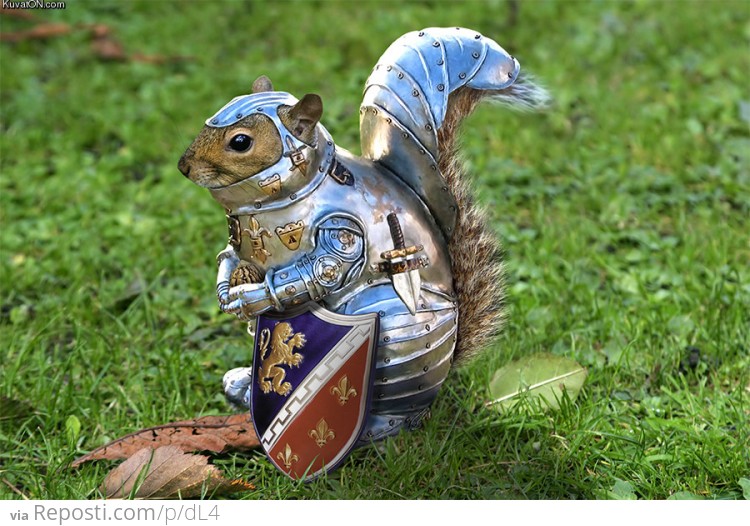 This picture was the writing prompt from an earlier post, something I saw on the Book of Face with a caption which went something like this:

You swerve to avoid a squirrel. Later, in your hour of greatest need, the same squirrel returns to repay its life debt.

It stuck with me. There are squirrels all around me, at home and at work. They do chirp at you, and some will come up and eat from your hand.

So here’s my quick and silly story based on that photo. (Sidenote: I swear it’s a photoshop job, but whoever did it put some real time into making it perfect.)

THE SAGA OF SIR BUSHYTAIL THE BRAVE

Hathaway took pride in being a good guest, so he nodded at the massive elk antlers mounted on the wall and smiled at a fat raccoon pelt arranged like a tiny rug next to the fireplace. What he couldn’t help staring at was a squirrel, expertly preserved, wearing a suit of armor.

This wasn’t a novelty, a stuffed animal wearing shiny plastic bits that didn’t really fit right, the kind of thing you buy at a tourist trap. This was a real squirrel wearing metal armor someone had clearly taken the time to mold to the animal’s exact dimensions.

Touching it would be rude, of course. So he sat down at a once-grand dining room table, now scratched and hazy, as his host poured a pot of tea. Her gray hair was stuffed under a hat and gardening gloves poked out of her pockets. A sturdy, capable woman, with a scar on her cheek to go along with the wrinkles she’d earned.

Maybe getting her to talk about the squirrel would make it easier to get to the delicate issue he’d come here to uncover.

“Oh, that’s a silly story nobody ever believes.”

“You already suspect that I’m crazy.” She stirred her tea. “Telling you would only confirm that theory.”

He persisted. After they finished a second cup of tea, she gave in.

“My husband left to work at six in the morning for thirty years, so I’d make him coffee—Dale never cared for tea—and walked out to his truck to kiss him goodbye. When the sun comes up, day critters like that squirrel wake up and start talking to you, while night creatures, like that big one-eyed monster on the floor, head back home to the woods. I took to bringing my slingshot to chase them from staring through the wire of our chicken coop.

“After he’d leave, I’d stay out and watch the sun come up as this family of squirrels came out of a hole in that big alder by the garage. It got to where I’d wonder over to say good morning and they’d chirp and chatter right back. So I read up on what they ate and started leaving nuts, mushrooms and corn on the cob, though you gotta dry it first. Got to the point where the big male would come right up and eat from my hands.”

Hathaway raised an eyebrow. “The one up there?”

“Bushytail was always the friendliest. And boy did he chirp, like we were having a real conversation. I tell you, there’s something in the water here. So one day, One Eye the raccoon must have gotten tired of staring at the chicken wire and decided the squirrels would be an easier meal. It took five hits from my slingshot get him off Bushy, who was torn to hell. I brought him inside, cleaned off the blood and tried to make him comfortable in a shoebox filled with shredded newspaper. To let him die in peace, warm and dry by the fireplace there.

“Except he didn’t die that night, or the next day. I cut up apples for him and kept a few walnuts in the shoebox. On the fifth day, they were gone, and he was out of the box, limping around. We couldn’t keep him in here—squirrels aren’t potty trained—but I didn’t want to put him outside. Instead of fur, half his back was scar tissue, and he could barely crawl around.

“Putting him outside would be like killing him. So at first I cut holes in a baby sock, like a sweater, to keep him warm. Dale joked about putting chain mail on top of it, to help him when One Eye came back for seconds. So when he left for work, I flattened out a Campbell’s soup can with a hammer until it was the right shape. Took a few tries. Glued felt on the inside for insulation and painted the coat of arms on it. Dale came home and laughed like I’d never seen him in fifty-two years. Then he asked me how it fit.

“Making it fit took the next day. Bushytail—now we called him Sir Bushytail the Brave—got used to it. He curled up by the fireplace wearing it and seemed to feel safe again for the first time. Protected. So we let him out in the back yard and sure enough, he went back to his tree and his family, just like before, just he was a little slower and still limping.

“We started getting surprises on our porch. A fat pine corn, then a pile of acorns. I swear his little ones copied him, because a tiny squirrel followed him one time with a pine corn it could barely carry. And he tended to stay close to us, to climb up our legs and sit on our shoulders.”

She patted her left shoulder with a smile on her face.

“So on a miserable, rainy day, the raccoons finally found a way to get into my chicken coop, and I grab Dale’s old baseball bat to chase them off. The little ones, they scatter. The big boar, One Eye, he stands his ground and claws me in the leg. I slip and fall, and that evil bandit comes right at me, scratching and biting his way up my legs and body to my face, and I’m thinking this is how I’ll meet my maker, sitting in chicken shit while a devil squirrel chews my face off, staring with my cheek.

“And right when I’m making my peace with the Lord, a glint of shiny metal flies over me and lands on the back of One Eye, who screams and yips like he’s been set on fire. Bushytail is clinging to his back and gnawing through the thick part of that raccoon’s ear. It gave me enough time to crawl out of the coop and go inside to get cleaned up. Next morning, Dale snuck out with the twenty-two and waited for that raccoon to rumble up our hill back toward the forest, and I was happy to pull the trigger and turn that monster into a rug. And I swear, even after Bushytail died, the squirrels he sired still remember our friendship.

“But maybe this is just a silly story, something Dale and I made up to entertain the grandkids. Your cup of tea is empty and I need to make another.” She stood up and poured water into a copper pot.

After two more cups of tea, Hathaway managed to learn what he needed without making it obvious. The story about the squirrel seemed more and more like what she’d said: a legend invented to entertain grandchildren and guests.

When they said their goodbyes at the door, he was convinced they’d bought the stuffed squirrel at a novelty shop, and he started to wonder if she was simply a great storyteller and liar.

That’s when Hathaway stepped on a pile of acorns, stacked neatly by the door.

4 thoughts on “The Saga of Sir Bushytail the Brave”