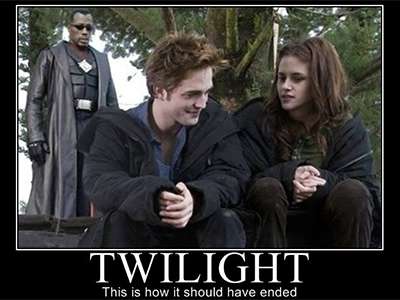 My mother drove me to the airport with the windows rolled down. It was seventy-five degrees in Phoenix, the sky a perfect, cloudless blue. (Fiction Law #1: Don’t open with the weather or your mom.) I was wearing my favorite shirt – sleeveless, white eyelet lace; (Fiction Law #2: Don’t open with what you’re wearing, because nobody cares.) I was wearing it as a farewell gesture. (Here we go, our first bit of conflict or story: a farewell.) My carry-on item was a parka. (This relates to how much it rains in Forks, and I guess you could argue it’s a bit of foreshadowing, but my God, no story on earth turns on whether a teenage girl is taking a parka as carry-on luggage versus stuffing the damned thing into her Samsonite.)

In the Olympic Peninsula of northwest Washington State, a small town named Forks exists under a near-constant cover of clouds. (This reads like was cut-and-pasted from Wikipedia, with a surplus of Things in Caps, and it is all Rather Boring.) It rains on this inconsequential town more than any other place in the United States of America. It was from this town and its gloomy, omnipresent shade that my mother escaped with me when I was only a few months old. (Conflict! A tiny bit of it, finally.) It was in this town that I’d been compelled to spend a month every summer until I was fourteen. That

was the year I finally put my foot down; these past three summers, my dad, Charlie, vacationed with me in California for two weeks instead.

It was to Forks that I now exiled myself – an action that I took with great horror. I detested Forks. (Hold on: how can you complain so bitterly about something you’re doing to yourself? As a teenager, you don’t really decide to exile yourself. Bella is getting sent to Forks against her will, right? Otherwise, there’s no conflict. So this graf must die.) 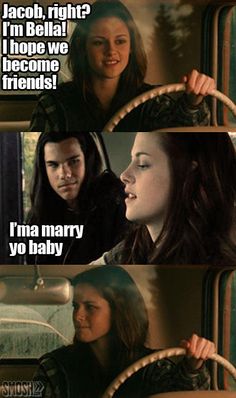 I loved Phoenix. I loved the sun and the blistering heat. I loved the vigorous, sprawling city. (This should be the first sentence of the entire book. The second sentence should be something like, “But now I’m getting on a plane to Forks, Washington, where it rains more than anywhere in America, if not on earth. I hate it, and there’s nothing I’ve said to change my mom and dad’s mind about it. So I’m flying towards hell.”)

My mom looks like me, except with short hair and laugh lines. I felt a spasm of panic as I stared at her wide, childlike eyes. How could I leave my loving, erratic, harebrained mother to fend for herself? Of course she had Phil now, so the bills would probably get paid, there would be food in the refrigerator, gas in her car, and someone to call when she got lost, but still…

“I want to go,” I lied. I’d always been a bad liar, but I’d been saying this lie so frequently lately that it sounded almost convincing now.

“I’ll see you soon,” she insisted. “You can come home whenever you want – I’ll come right back as soon as you need me.”

(This sucks all the conflict and tension out of the story so far. Moving to Forks can’t be Bella’s choice. Teenagers don’t get to decide where to live, what to drive, when to wake up and what to do all day. Otherwise, every teenager would live in Maui, drive a convertible Ferrari and wake up at noon to eat Cheetos and play Xbox all day instead of going to school and doing homework and chores.)

But I could see the sacrifice in her eyes behind the promise.

(Is there a thing called anti-foreshadowing? Because the last line just did it. You want to hint to the reader that dangerous, exciting, crazy things will happen in this novel. Not that everything will be just fine. And you never, ever put in dialogue that’s on the noise like “I love you, Mom.” Do something interesting and different.) 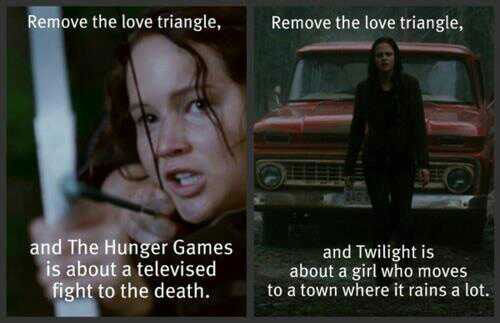 Notes from the Red Pen of Doom

This isn’t FIFTY SHADES OF GREY bad, but it’s pretty close, and I see why so many authors asked me to take a red pen to TWILIGHT.

A protagonist who creates her own problems is fine … for a tragedy. Hubris works there.

The conflict here is Bella must abandon sunny Arizona for Forks, even though she totally hates Forks and the rain. Doesn’t work and doesn’t make story sense, since Bella making the decision that she hates so much undermines the tension. Tragic heroes make decisions that turn out horrible. Regular heroes are reluctant and react to Bad Things They Didn’t Cause.

I’m sure the next 50 pages explain why she’s going to live with Dad or whatever, and that’s great. But you don’t want to start like this, undermining the tension and trying to get people to believe a teenager is the one making these decisions. If a couple is divorced, two parents, two lawyers and a judge are making these choices. Not the kid.

So first things first, she must be forced to leave her happy home for what she feels is the Tiny Logging Town Full of Rain and Misery.

Also: As somebody who lives in a tiny one-stoplight logging town where it rains a lot, let me say this: she’s dead wrong. Love it. Rain means trees, and summers here are glorious vs. baking in an oven. Plus, the whole running out of water and climate change does not bode well. Ten or twenty years from now, we’re talking MAD MAX: PHOENIX as they battle with an army of Californians in the Grand Canyon for control of the last drops of the Colorado River.

There’s more flair YA stuff like DIARY OF A WIMPY KID, so yeah, TWILIGHT is pedestrian.

These first two pages don’t feel like a teenager talking. A real teenager wouldn’t be so somber and serious as they whined about All These Terrible Things. She’d name-drop at least three BFFs she’d never see again and list the Arizona boys she’d never get to date in ranked order according to agreed-upon hotness.

I know from hearing about the movies and such, that this series is about a love triangle involving a sparkly vampire and a werewolf. Okay, fine.

HOWEVER: if you want to do that sort of thing, it’s always good to establish that world early, and to tie in the conflict of Living in Sunny Arizona versus Moving to the Land of Dreary Rain.

My guess is this whole Arizona thing disappears the second Bella spots a hot sparkly vampire in the cafeteria or whatever. Maybe he’s chugging chocolate milk and its totes adorbs.

These first two pages could be from any YA drama, and if it went on too long like this, throwing in vampires and werewolves would be a surprise. This feels like it’ll be DIARY OF A WHINY TEENAGER until bam, high school kids are turning each other into the undead on page 40 or whatever.

One easy fix would be to make the second love interest a boy back in Arizona, a regular boy who’s not a werewolf, zombie, sorcerer, cyborg, changeling or secret agent.

Make him normal because it stretches credibility that one normal teenage girl would happen to stumble upon a sparkly vampire AND a werewolf Power Ranger at the same tiny high school.

A regular boy as the competing love interest gives Bella a tougher choice. Instead of the unbelievable choice of “(a) life with an undead freak” versus “(b) life with a wolf-man freak,” she could choose between sunny Arizona and a normal life with normal babies versus becoming undead and drinking the blood of cougars and such while Taylor Lautner creeps on your freakazoid daughter.

Also, replacing Taylor Lautner with Arizona Boy would make the opening chapter problem of “Oh, no, I’m being forced to leave the Land of Sun and My True Love for stupid Rainy Rainville” into a real problem that would last the entire book.

If you’re going to write a story with vampires and werewolves, and that’s where most of the tension and conflict lives, I’d at least hint at the vampire goodness in the first two pages. Go big or go home. You can get a lot more mileage by hinting at your biggest conflicts than trying to milk itty bitty ones about parkas and rain.

You could start with something a lot more memorable.

Here’s my knee-jerk first line: “Do you want to live forever? Because you can. The only trick is this: You have to die first.”

That isn’t “Call me Ishmael,” but it’s a giant improvement over the weather and what Bella’s wearing.

Hate the whiny protag, hate the story setup where she’s bringing this move upon herself and hate not including any vampire / werewolf foreshadowing, because that’s worth a lot more, story wise, than whether she carries the parka on board or packs it in the suitcase.

Strap it down, nail a stake through it’s heart and kill it with fire.

More posts for your amusement and possible education: