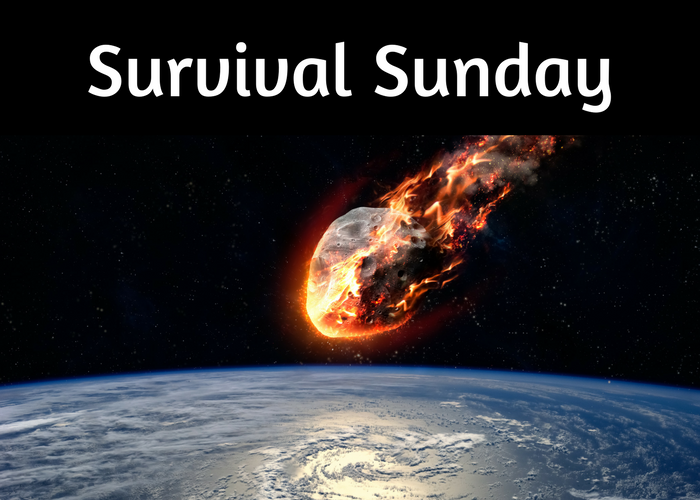 So people are freaking out because (a) the Yellowstone supervolcano blows up every 600,000 years, (b) it would turn North America into a sea of ash and create a mini Ice Age, (c) the magma pit under the supervolcano is causing earthquakes and bulging and  (d) there’s a viral video of bison running along a highway, supposedly fleeing the coming explosion.

Well, grab your bug-out bag and run for the hills.

Except it might not happen for another 100,000 years. So there’s that.

This video lends weight to survivalist types pointing at the stockpile of canned food and ammo in the basement and saying, “See? It was all worth it. Throw the tent in the pickup and let’s head to the Yukon.”

On the other hand, a supervolcano is a complicated thing. It doesn’t sleep for eons and suddenly wake up to go boom, as this man of science explains in a smart, rational look at Yellowstone.

And finally, this park ranger at Yellowstone, who sort of knows more about the bison and the supervolcano, seeing how it’s his job, destroys the whole “the bison are fleeing, so we must run for our lives, too!” thing.

In the end, I disagree with the viral video folks and End of the World theorists saying “This is it.” Will this supervolcano go nuts? Someday. Scientists say there’s a 1 in 10,000 chance Yellowstone will blow in our lifetime.

Those odds make this far, far more likely than (1) a zombie infestation, (2) U.N. black helicopters coming for your shotgun or (3) killer robots that transform into cars making a mess out of Manhattan. If you’re going to be smart about being prepared, yeah, it’s worth thinking about Yellowstone.

But it’s not worth obsessing over, and there’s no need to panic.

Will you likely dodge most of them? Sure. But 10 out of 10 people die, those are known dangers and it only takes one of them to get lucky and add you to the list. It’d be smart to prepare and prevent the most likely dangers, seeing how they’re basically sure bets compared to Yellowstone going boom or a giant asteroid slamming into Florida because Bruce Willis was too busy making THE EXPENDABLES 12: BUSTING OUT OF THE NURSING HOME.

So while I agree with survivalists about being prepared for more than a flat tire, you should be brutally practical and look at the odds, then spend time and energy on the most likely Terrible Things You Would Like to Avoid, and 99 percent of those problems aren’t solved by me stocking up on more cases of MRE’s. Though I do have a killer plan for making any house zombie proof.

3 thoughts on “Everybody panic: expert says Yellowstone Supervolcano could ‘destroy the United States’”