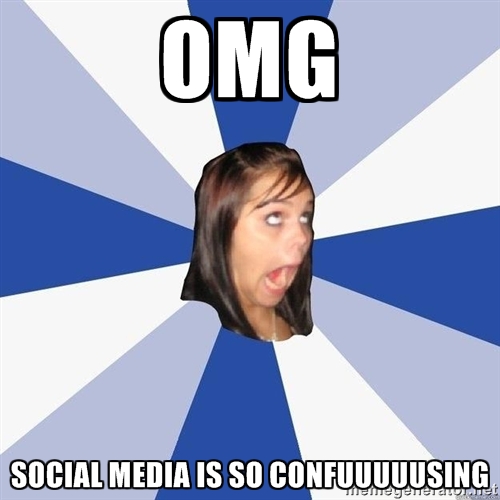 It is official: social media now dominates the Series of Tubes.

Every year, these smart people produce a slick video about the interwebs, and this year’s video is especially good and interesting.

Now, having filled your brain with facts and numbers and industrial euro-pop dance music, WHAT DO WE DO?

Simple. We change the world.

So you’ve got contacts in your gmail at home and Outlook at work, Twitter lists of followers and all kinds of Facebook friends, Tumblr buddies and Pinterest pals and a dozen other things.

It is an unholy mess.

Blessed be the app that gives us One Contact Thing, a single shebang with the magical powers to organize all your contacts, from all those stupid platforms, in one tidy place. The power will be unthinkable.

This means ending the nonsense about Instagram not talking to Twitter because she saw him flirting with Google or whatever. And yes, we need it to be easy and quick and on our phones. Because I’m not firing up the PC every time I need to look up a phone number or Twitter handle.

Whoever does this first — Apple, Google, Microsoft, some dude in his basement coding the app in his pajamas — will rule the interwebs forever and ever.

Nobody likes voice mail. Nobody.

Don’t call my cell phone and make me dial up voice mail, punch in a password I keep forgetting, then listen for two minutes. Especially when 99.99 percent of all voice mail messages are things you can sum up in a short text like, “Phone tag, you’re it” or “Pick up some milk, yo” or “I’m a reclusive billionaire with $400 million sitting around, and instead of handing it to Karl Rove, who I wouldn’t trust at this point to run a successful race for student body president at Willapa Valley Junior High, I’d like some return on my investment.”

Send a text, people. College kids these days don’t even use email anymore. They think email is so 1994.

If it’s too complicated for a text, send an email.

If you really hate me, send a voice mail. Make it long. Don’t leave your number or email — assume that I’ve memorized it. And then when I call back, make sure you don’t answer your phone so I can start the whole thing rolling with a voice mail of my own.

Therefore, we will nuke voice mail from orbit, and the world will rejoice.

Twitter, Facebook and every other social media shebang is full of photos and bios of people that may be human, and might be young or old, male or female, con artist or genius.

You can’t tell, though, because (a) their profile photo is a shot of a cat, Yoda holding a lightsaber or a pile of leaves, (b) their Twittter handle is @jkringer392 and (c) their bio is a train wreck of obscure references to Star Trek fan fiction and such. I have seen all of these things and more. Who will pay for my therapy?

HOWEVER: papers of news, TV stations and serious blogs need to stop feeding the trolls by letting TrailerParkNinja and TexasMustSecede2016! dominate the comment sections with anonymous spam and hateful, nonsense. So let’s cut back on that by requiring commenters to use real photos and bios. Want to spew? Go spew in Anonymous Land.

If you’re going to be on the Series of Tubes, and want to be taken Seriously, you need a Serious photo — of you, not your cat — and a real bio. Period.

Long ago, only famous people needed public relations folks, who made sure actors, authors and other celebrities had good mug shots and nice bios. Today, everybody is online. Your photo, bio and name are what people see first. But average people don’t have a publicist. They’re flying in the dark with a blindfold, and yeah, it shows.

Wonder why you aren’t getting many followers on Twitter or hits to your blog? Take a look at your photo and bio.

Trying to get a job / book deal / punk rock music contract? Take a hard look at what people see, in the first five seconds, when they check you out on Twitter and the Book of Face and such.

People don’t make a decision about you after reading your short stories or listening to three mp3s of sample songs on your blog. They glance at your photo and decide, in half a second, whether to interact with you or never give you a second thought. They do this all the time, in a hurry. Ten people just followed you on Twitter, and you follow back or not, clicking away with your mousity mouse, no-no-yes-no-yes-yes-no. You don’t ponder these decisions, right? Bam. So make it easy on people by taking it seriously. I’m talking to you, Miss Duckface, who shot your profile photo in the bathroom mirror using an iPhone.

People need a place –a Profile Doctor–to get easy and quick help with this sort of thing, without putting a public relations firm on retainer.

7 thoughts on “3 ways to change the digital world FOREVER”