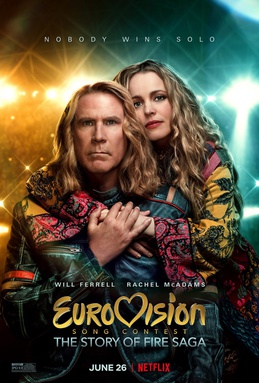 Listen: comedy is incredibly hard. Maybe the hardest thing when it comes to storytelling and entertainment. Because you have to take risks, and most of those gambles won’t pay off.

This is why movies coming out of Saturday Night Live alums are hit-and-miss. A joke that gets stale and repetitive during a three-minute sketch is just about impossible to stretch into a 120-minute movie.

I swear the best comedies are made in the editing suite–throw 100 things at the wall, go wild, and have the editor and director pick the 10 things that really work while chucking the other 90.

EUROVISION SONG CONTEST may seem like one of those skits, something that might be hilarious for one song and painful to sit through for an entire movie. Check out the trailer.

I’m happy to say the opposite is true. This is fresh, funny, and surprisingly good.

The movie is set in Iceland, which needs to be featured more. It’s a wild place. Having visited there, it’s nice to see it in a major movie.

And while this is a comedy, the ending is excellent and surprisingly moving. TEARS MAY BE SHED. I won’t spoil it all by including the final song. Instead, here’s VOLCANO MAN, a great appetizer for the movie.

You’ve already burned through everything else on Netflix, Amazon Prime, and your brother’s DVD collection.