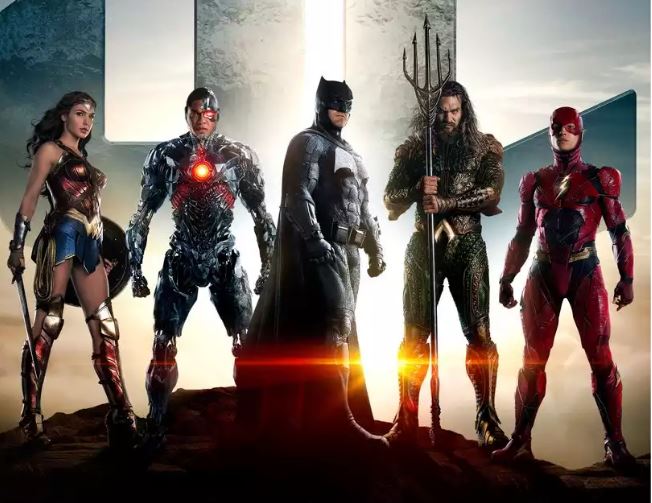 ACT 1, opening scene: BRUCE WAYNE drives up in a classic black car to a black tie event. He opens the passenger door for a leggy model in Little Black Dresses and Zack Snyder makes sure the sky is an appropriately grim shade of black. In the middle of the charity ball, as Bruce is giving a speech, he notices a flash in the sky and makes an excuse to leave.

BATMAN rolls up to an industrial part of Gotham where all is not right. An alien war machine nearly kills him.

Over at Arkham Asylum, LEX LUTHOR won’t tell COMMISSIONER GORDON or BATMAN what he knows about the alien war machines. He simply gloats and says they aren’t ready for the invincible army that’s coming, though he will make popcorn and watch from his prison cell. LUTHOR does reveal the invasion of alien war machines is not being sent by the Purple Man Who Does Not Like To Stand, because that villain only attacks Earths populated by Marvel superheroes.

On the rooftop, WONDER WOMAN arrives to tell BATMAN they can’t fight this war alone, and without SUPERMAN, they won’t last ten minutes, and this movie has another 105 minutes to go, so that won’t do at all. This is war. They need an army.

In a montage, a series of would-be heroes are approached by BRUCE WAYNE and reject his suicide mission.

One exception is a pebble-faced man in a hoodie, who says if they both snagged their other costume, they’d bring a total of four superheroes to this fight. BRUCE WAYNE tells the man, “This is D.C.–we don’t do irony.”

Meanwhile, the alien robot army pauses to consolidate its grip on North Dakota for some reason, instead of taking over the world already.

BRUCE WAYNE wears steampunk goggles to brave the cold of GREENLAND, which is not green at all, to get his butt kicked by AQUAMAN in a bar.

AQUAMAN refuses the call to adventure and says this isn’t the proper way of doing things. He’ll wait for his own solo movie before joining any ensemble as a sidekick.

FLASH eagerly joins up because he’s this movie’s dorky version of Peter Parker, nerding out about being allowed to hang with a billionaire playboy with a cave full of armor and technology.

The growing crew finds CYBORG fighting off a gang of alien robot warriors. CYBORG interfaces with a dying alien robot to uncover the truth: they’re scouts for DARKSEID, a villain whose superpower is that you’ve never heard of him.

Alien robot warriors grow bored in North Dakota and descend upon the village bar where AQUAMAN is scowling while he drinks his mead, which spurs him into wearing a costume that, sadly, looks better than the Batsuit we’ve been looking at for three different movies.

Wave after wave of CGI alien robots flit through the sky and swarm the ground.

AQUAMAN leaves the fight for some made-up reason so he can sulk before coming back again. CYBORG seems to get taken down by a horde of alien robots and BATMAN gets trapped in a cave, which is as close to ironic as D.C. dares.

Meanwhile, WONDER WOMAN looks amazing in slow-mo as she destroys legions of glowing alien robots, because slow-mo is her motif, if you haven’t seen the trailers for her movie yet. But it’s a losing battle. No daughter of Zeus can single-handedly win this kind of war.

It takes a son of Krypton to help out, so SUPERMAN rises from his real grave, not the fake one in D.C., to fly around in a black suit which also looks better than the weird, short-eared Batsuit we’ve been looking at for three movies.

BATMAN finally escapes the cave and CYBORG reveals that he interfaced with another alien robot to learn the location of their secret server farm, and that they’re not using https yet.

WONDER WOMAN, BATMAN, AQUAMAN, FLASH and CYBORG pile into the Batplane to do battle, but only after BATMAN finally puts on an armored Batsuit that actually looks like it was designed for, I don’t know, fighting. SUPERMAN flies solo, because he’s still getting over being dead.

Even more endless waves of alien robots fly into battle to get smashed into glowing bits until we get a glimpse of DARKSEID, a special giant clump of dark, glowing CGI with an impossibly deep, gravelly voice based on Christian Bale’s growl in THE DARK KNIGHT, and yes, this is daringly ironic for D.C.

DARKSEID throws around the heroes until he gets bored. Nothing they do hurts him.

Finally, SUPERMAN gets tired of puny punches. He picks up DARKSEID and flies him into space, past our sun, past another sun and finally into a black hole, though when he flies back CYBORG reports that this alone won’t kill the villain. DARKSEID is still communicating with his network with a 2400 baud moden. He’ll return, stronger than before.

A bloody BATMAN picks himself off the floor to say, “We’ll be ready.”

You’ll stay to watch the credits. They will be long. At the end, there will be no post-credit scene, making you remember this isn’t a Marvel movie, though the plot of AVENGERS: INFINITY CRISIS I and II will be roughly the same thing–big bad guy leads alien invastion–with the exception that IRON MAN, THOR, CAPTAIN AMERICA and the Hulk only beat the villain by sacrificing themselves and becoming trapped in another dimension or timeline at the end of the second movie, because their contracts are all up.