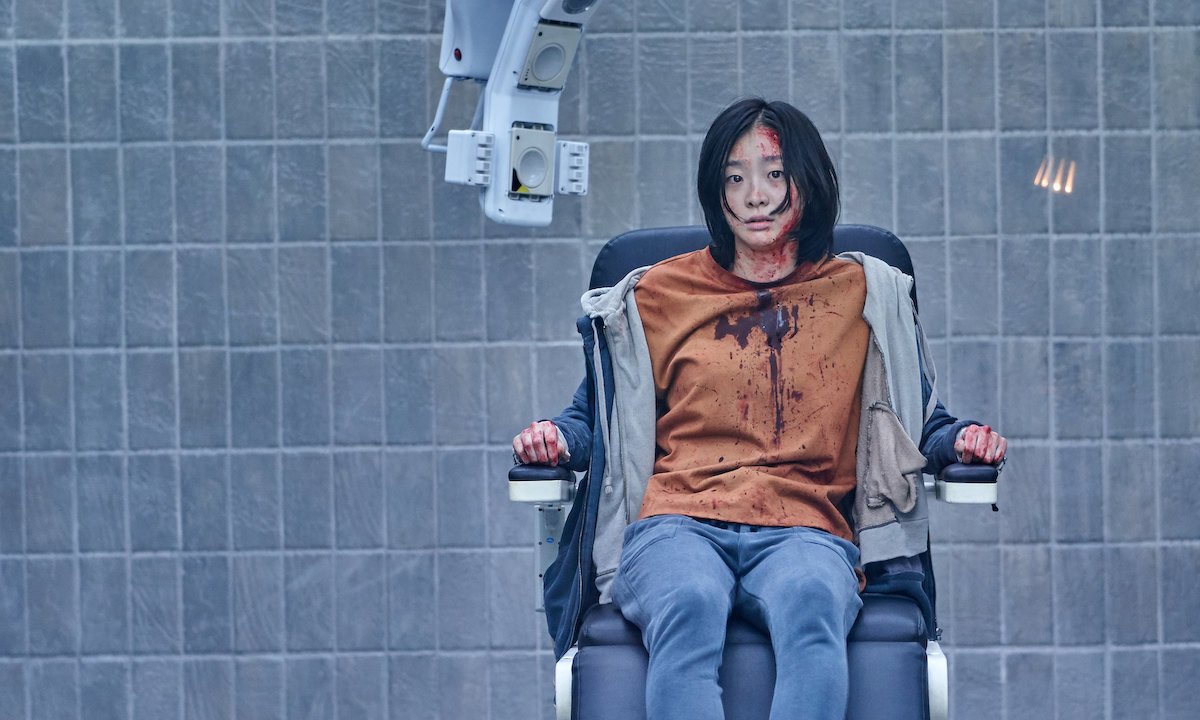 Because we are all watching Netflix and Hulu and digging through the garage to find that old VHS player because we cannot stomach rewatching IRON MAN 2 again, there are 7 billion people desperate for something new and glorious they hadn’t seen already.

So what makes something great compared to that thing you clicked off after ten minutes because it put you in a coma?

It’s the structure and storytelling that makes this movie special, not the acting or special effects. Watch the trailer, then let’s dive into it.

This movie starts fast and is a slow burn in the first third. Then the last half has some of the best twists, reversals, revelations, and fights scenes in forever.

Here’s the crucial difference: in most movies, the hero/heroine is always a step behind the villains. Only in the end do they learn what’s really happening, usually during the Villain’s Big Monologue When He Should Be Killing Errybody, and the climax features an overmatched protag somehow finding a way to beat the unstoppable genius villain.

THE WITCH reminds me of why I love SHIMMER LAKE, and it’s because they reverse this normal dynamic. The villains are a step behind the hero the whole time, though you don’t know that until the end, and the climax features an overmatched villain getting outsmarted and crushed. So yeah, it’s a romp at the end, but so, so, satisfying.

Just for kicks, here’s the trailer for SHIMMER LAKE, which you should watch, then watch again. It’s brilliant.

Honestly, I’ve watched dozens of movies in the last few months, and even the decent ones don’t really surprise you at the end. They hit the same old notes and use the same old formulas.

It takes talent and discipline to structure a movie like THE WITCH, or SHIMMER LAKE, to subvert all those tropes and expectations. When it happens, it’s glorious to see.

Fire up the Netflix and watch this thing.

Then watch SHIMMER LAKE to see who two movies with completely different genres have similar clever endings that are so satisfying.

We live in the Golden Age of comic book movies, with Marvel and DC pumping them out as faster than you can swipe your VISA for $14 tickets to IMAX 3D and $9 bags of popcorn.

Here’s the secret recipe for mediocre superhero movies and its two sequels, each of which will costs at least $250 bazillion to make and $150 gazillion to market, and no, those insanely high numbers are not why you have to pay so much for tickets and kernels of dried corn that have been exploded. That’s a coincidence.

Note: I strongly deny the theory that this post is suggesting movie studios spend more than 1 percent of the budget on the actual story, because diverting that amount of money would eliminate the CGI budget for the skyscraper that explodes and falls down in the middle of the seventh fight scene, the one in that city that sort of looks like Vancouver, B.C. after the villain kidnaps the love interest and has a creepy dinner with her in his lair, but not the explode-y fight scene where the villain crashes the mayor’s birthday party to announce his plans for doomsday.

Secret Ingredient #1: A hero is born, which means Mom and Dad better have life insurance

Sorry, moms and dads of the world: if your son or daughter is destined to put on a mask and cape to fight evil, there’s a price to pay. Which means you’ve got to go.

Superheroes with dead parents are incredibly common, for these good reasons.

Here are those reasons: (a) any villain with a brain in their noggin could simply kidnap mom and dad whenever they wanted something, forcing (b) every movie or comic book starring a superhero with actual parents to spend precious time explaining exactly how mom and dad are hiding and surviving, (c) dead parents are an easy way for writers to give their superhero their motivation to fight crime and evil and (d) how else would you get Superman to fight Batman except by leveraging his human step-mom?

The list of superheroes with dead parents is so long I don’t even have to start, but I will: Batman, Superman (his real parents, not Martha), Iron Man, Captain America, Black Panther—you get the picture.

Secret Ingredient #2: Our hero is a total loser

This is a necessary step to the first movie, which tells the hero’s origin story.

You have to show how lame the hero is before he gets his powers. The bigger the contrast, the better the story.

Peter Parker is a nerdy little high school kid who gets bullied.

Steve Rogers is so small and scrawny, they won’t even accept him as a volunteer to fight in World War II.

Tony Stark is a billionaire playboy who invents and sells weapons when he’s not busy trying to poison his liver and catch every STD known to man.

Finally, here’s an example that shows how going halfway doesn’t work AT ALL.

Oliver Queen (Green Arrow) is a billionaire playboy who’s totally not a copy of Batman, and though Arrow’s rich father is dead, his mom is still alive, and living with him (?) and his kid sister (??) in the same mansion, even though he’s a grown man. Yeah, that’s the setup. It is as soap-opera-ish and stinky as you could imagine.

A superhero needs talents and powers, whether they come from (a) a science experiment gone wrong (Spiderman, Hulk), (b) a science experiment gone right (Captain America, Ant Man), (c) years of training and (Black Widow, Falcon, Arrow) or (d) being a playboy billionaire genius who invents his own suit and arsenal of gadgets (Batman, Iron Man and a dozen other copycats not named Arrow).

Then there are weird powers that we do not, cannot and will not accept, like gills to breathe underwater combined with the ability to get whales to act like underwater taxis whenever Batman and his buddies in the Justice League don’t feel like using in the Batsub or Wonder Woman’s invisible plane.

Secret Ingredient #4: An old mentor who eventually MUST DIE

The same clause in Sean Bean’s contract that requires him to die in every role is included for any actor playing the mentor to our superhero.

This is also necessary, because eventually (a) the screenwriters will write themselves into a corner and need the ultimate motivation for the hero to go beserk or the aging actor playing the mentor will (b) get sick of being a glorified sidekick and do other roles or (c) demand insane amounts of money to be in the sequels.

Before he dies, the mentor needs to be wise, charming, helpful and funny.

This is almost always a male role, whether we’re talking about a hero or heroine. Sorry. That’s how the Bad Superhero Blockbuster rolls.

Our old and grizzled mentor also needs to own many hats, because he’ll be wearing them all: sidekick, martial arts trainer, tech support and father figure.

But his death serves another purpose, because it opens up the way for five different sidekicks to pick up those hats, dust them off and put them on in the sequels.

Didn’t expect this in a movie with capes and explosions, did you? But it always happens.

Captain America had Agent Carter and now her niece.

Iron Man has Pepper Potts when they can afford Gwyneth Paltrow.

Batman has Rachel, or he did for a while, though I’ve always said it’s a lot like Harry Potter winding up with his best friend’s sister instead of Hermione: wrong, wrong, wrong. Batman should be forever linked to Catwoman, who rocks.

The new Wonder Woman will have Captain Kirk, which is pretty cool. Great actor. Good choice.

Arrow has–actually, I don’t really care about Arrow’s paramour, and don’t even make me think about what Aquaman does on Friday nights.

Back to our recipe: Preferably, this relationship should (a) start as early as possible, maybe even childhood, and (b) it should be a love triangle, with the third person also a friend from childhood.

That third person, ideally, should be our next ingredient.

No, a villain is common and boring.

A nemesis last. He or she endures.

But this takes time. Like fine wine and good whiskey, a nemesis must ferment. Because they start out good before turning sour.

The hero and nemesis were once friends, if not best friends. Maybe they both wanted the same girl, the same achievements, the same powers and status.

A true nemesis is the flip side of the hero, showing what happens if you take the path less travelled.

Or you could take the easy way out and cast an aging Hollywood has-been as the villain, somebody who used to be box office gold. Give them a terrible foreign accent, a little backstory and let them chew up the scenery until the hero punches them into oblivion and locks them inside a chamber that gets flooded with radiation from the superweapon our big baddie intended to use to nuke LA.

Also: a quick, Cheaty McCheatypants way of creating your nemesis is to give him or her the same powers or power source as the hero.

This so lazy and bad, it rarely happens except for Iron Man 1, Iron Man 2, Thor, Man of Steel, Batman Begins, Arrow and fifteen other movies and TV shows I won’t look up right now.

It’s not enough for your villain or nemesis to steal every bar of gold from Fort Knox or crown himself Lord of Canada after unleashing his army of mind-controlled badgers with steel-tipped claws and industrial lasers strapped to their heads.

To be a truly clichéd superhero movie, the villain must threaten to destroy planet Earth, or at least nuke Gotham or Metropolis, which is the same thing for DC movies.

You can blow things up however you like, though nuclear warheads were only used as a plot device in every other Bond movie, spy film and TV show since 1953.

What gives you enough pop to make the third rock from the sun go bye-bye? Here are your choices: (a) an bio-engineered super virus, (b) alien invaders, (c) an army of killer robots / sharks / zombies or (d) manipulating or mind-controlling a hero so the other heroes have to fight them, especially if the hero is somebody unstoppable like Superman.

Secret ingredient #7: Clean up the kitchen and start prepping for sequels

To be a truly Bad Superhero Movie, you must follow the recipe exactly. To the letter.

It also costs twice as much. Batman Returns, Spiderman 2 and The Dark Knight all follow this formula.

Movie # 3 has three villains and three sidekicks. The number of love interests is your choice. Spiderman 3 and The Dark Knight Rises are good examples. We’re not even going to talk about the Batman movies starring Val Kilmer and George Clooney. Not gonna do it. Wouldn’t be prudent.

The budget for Movie # 3 is also triple the original.

Despite all the big name stars and big budget for explosions, the story is a mess and entire thing collapses under its own weight, with the only hope of bringing it back being a reboot with a new actor and director.