If you’re attempting NaNoWriMo and are on track to finish the Great American Novel, congratulations. Carry on.

If you’re doing NaNoWriMo and there’s no way you’ll give birth to a full novel by Dec. 1 without quitting your job, getting divorced and downing pots of coffee along with stimulants sold by a sketchy long-haul truck driver—then congratulations, this post is for you.

Hear me now and believe me later in the week: given the choice of holding in my  hands (1) an absolutely finished hot mess of 100,000 words or (2) a single page blueprint of a brilliant story, I’d pick B.

And you should, too.

Blueprints and structure are also the way you FIX a hot mess of a novel.

You sure don’t fix a train wreck with spell check and diligent proofing.

So: how can we actually draw the blueprints of a strong story?

I’m in the middle of finishing blueprints for two novels—one Serious and the other Just for Fun—so let’s use the latter as an example, the one where I’m completely subverting the cozy mystery genre. When they find my body in the library next to a half-empty cup of tea, ask the coroner check for arsenic and have a crack team of homicide detectives interview every kindly grandmother they can find, especially the ones who own a talking cat. There will be a reward.

To build blueprints, you have to start by picking out the type of story you’re telling.

The most important thing isn’t setting or genre. Story is different.

A story works regardless of whether you flip the genders of the protag and antag. The same story can be set in ancient Rome or a space station orbiting Mars.

Example: Romantic suspense is really a silly code word for a mystery with a female protag. I own every single Lee Child novel, all of them involving a beautiful woman who falls for Reacher and his folding toothbrush, while my wife owns bookshelves and bookshelves of romantic suspense. Swap the genders on the back cover blurbs and no, you can’t tell which are which. So please ignore genre for now, since it doesn’t matter for deep story.

Check out The Mother of All Cheat Sheets to give you a taste of most major plots.

If you click the JPG thing, magic technologies will summon a high-resolution demon I call “PDF,” and it’s same with the other cheat sheets later. 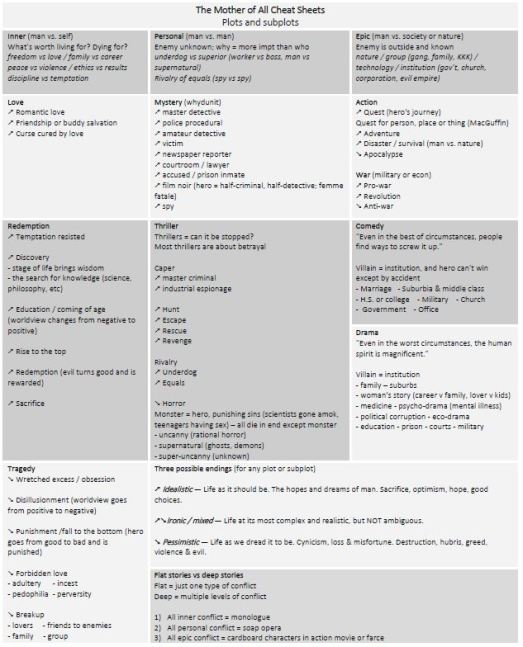 So what’s the most important thing when you start? Those silly arrows on that chart.

Not kidding at all.

Why would up and down arrows matter so much when picking your main story?

Here’s why: because the best novels, films, plays, speeches, music videos and 30-second TV ads have one thing in common: they maximize the emotional distance between the beginning and the end.

You can’t maximize that emotional distance if you don’t know where the audience is landing.

So: your first decision is whether the ending is up, down or mixed.

If you’re ending is way down, the beginning has to be sky-high. And vice versa.

Think roller coaster (up beginning, down ending) or rocket ship (down beginning, up ending).

How fast can you make this sucker go?

Explaining all this with primitive charts

The worst novels, movies and speeches are bad in the same way: they’re flat, with no dramatic difference between the emotion of the beginning and the end.

I love action movies, but endless chases and fights cranked up to 11 are boring. Same thing with bad literary movies, which are cranked down to a miserable 1 and stay there to the end, despite the fact every character is young, rich and gorgeous.

Michael Bay explosions and gorgeous scenery cannot save you from that lack of distance between the opening scene and the closing credits.

Here, there are crude charts and everything. Made them myself using technology Microsoft invented in 1995.

This is why tragedies are so easy to plot. The hero is successful, powerful and on top of the world, whatever that world may be: politics, business, whatever. Then they fall to the bottom, not randomly, but due to hubris.

That’s the beauty of tragedies: your protag and antag are the same person, which gives me infinite joy as a structure geek. 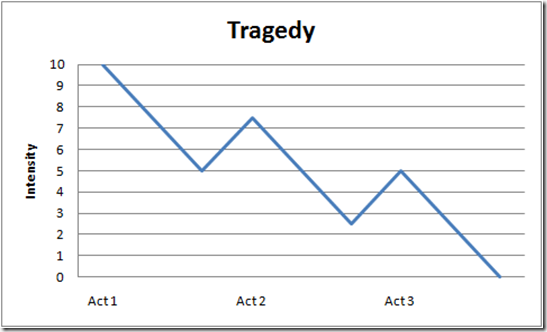 The trajectory of the entire piece—beginning, middle and end—flows entirely from that first decision.

So pick first: up, down or mixed?

The best stories have mixed endings. Take the fastest roller coaster or rocket ship in the world, then add a half-roll at the end of it that ends with the audience flying around at 300 miles an hour while upside down.

What’s a mixed ending? Two quick examples: The hero wins, but only at great cost. Or the hero gets the MacGuffin he worked so hard to achieve and discovers he doesn’t want it.

Think about CASABLANCA, CHINATOWN, THE EMPIRE STRIKES BACK and STAR TREK 2: THE WRATH OF KHAN.

Mixed endings are the hardest to pull off. But hey, you’re already doing the toughest thing a writer can attempt, which is to write something big.

That’s true even if it’s a screenplay about half the population of Madison, Wisconsin suddenly rejecting all technology to live as hunter-gatherers an island in the South Pacific, health care and toothbrushes be damned.

The easiest way to do this is to outline the biggest events from the villain’s POV first. Let your villain outsmart, outhustle and outmuscle the hero every step of the way until the very, very end.

Then go outline big scenes from the hero’s POV, maximizing the gap between expectation (OK, this will fix things) and result (oh, great, everything is even worse now).

You only need five to 12 big scenes for a blueprint. Everything else is setting up for your payoffs, so don’t sweat them yet.

Here’s a handy cheat sheet for your hero and villain.

Let’s call it The Troublesome Twin Sons of the Mother of All Cheat Sheets. 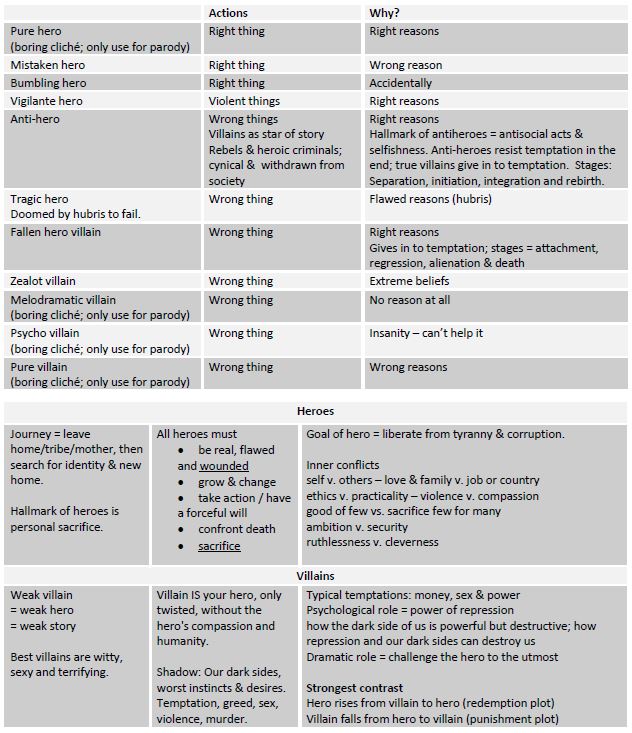 Anyone familiar with screenwriting understands the idea of a B story, which runs alongside your main plot.

I’d argue for a C story, too, giving you three strong threads to interweave.

Let’s call this The Helpful and Responsible Oldest Daughter of the Mother of All Cheats.

Say you’ve got a chapter where all kinds of important things are happening with the A story. Don’t make it about the A story. Make the scene seem like it’s about the B story, or C story, while you slip in little clues that feel like nothingburgers.

Those nothingburgers are real point of the scene.

Straight text hits your reader on the head with a sledgehammer, and they don’t cotton to that. Subtext whispers sweet little things in their ear while feeding them bon-bons. Go with subtext.

There’s a temptation to write half a chapter into the tiny box in the chart where that chapter should go, especially if you get inspired. No. Cut and paste all that somewhere else.

Keep your blueprints to a single page until the entire thing works like an expensive, finely engineered German sedan, except one that doesn’t cheat on emission tests.

3. Raise the stakes, then raise them some more

Super-agent Don Maass has a saying: “Raise the stakes.”

For every scene, Act and story, what if the villain wins—so what? How does that matter to the characters (private stakes)?

Say the villain wins. How would that victory change the lives of random people living nearby (public stakes)?

Don the Maass wants people to pump up the stakes whenever possible, and he’s right. Also: Two a’s, two s’s for Don. Just don’t ask people to spell the name of author Carl Hiiiaaaason, because they’ll do it just like I did it there, and it would not shock me if after the 4,954th time it happened, Carl pulled out his grandfather’s WWII .45 and dumped the body in the Everglades.

4. Different structures and timelines for the A story, B story and C story

Maybe you use Snyder’s Beat Sheet to map out the A story and put those elements in different chapters and acts. Use another structure, probably a simpler one, for the B and C stories. Maybe the hero’s journey, maybe tragedy or romance.

All of these blueprints have their distinctive beats for a reason, and you want to space those out so the same things aren’t happening to the same plots & characters at the same time.

Exception: if you can set up and pay off all three stories in a singular climax, hey, you’re a genius. Do it, then celebrate with a bottle of your favorite thing and tell us all how you pulled that off.

5. “On the nose” applies to more than dialogue

This screenwriting concept says people don’t say exactly what they’re thinking. They dance around the truth or say the opposite. Which is why dialogue that’s on the nose comes off as so fake and weird.

In a novel, movie or play, what’s the point of dialogue? Not for information dumps. It’s a verbal war: people with different agendas trying to extract information, or alliances, or buy time until the minions of the villain finally show up with their army of robotic squirrels.

Words are just another way to get something from other characters without spilling blood on the floor. And when words fail, blood might get spilled. So make sure they’re talking about something important. If they’re not, it’s just like those stupid scenes in the TWILIGHT movies where the high school girl and the sparkly vampire stare at each other because they’re so in love. No, I haven’t seen those movies. I saw a montage of all the scenes where they make goo-goo eyes at each other for Far Too Long, and it damn near put me in therapy.

“On the nose” also applies to entire scenes, chapters and acts. Nothing should be exactly what it seems.

And we all want a strong, beautiful story full of conflict and surprises.

Final note: This is a silly blog post written in an insane hurry. There are probably typos all over, and some of the ideas I rushed through can lead you down a rabbit hole of dozens of books. I hope it does. I hope some of those books get tossed across the room as useless while others earn a place of honor on your bookshelf. And I wish you all the best of luck in writing whatever you do, even if it’s country music. Can’t really listen to much of it, but the lyrics–oh my. Nashville folks can tell a whole story in 200 words or less, and it’s beautiful to read.

Final-final note: Fixed the interwebs error so when you click on The Mother of All Cheat Sheets, the PDF actually shows up.