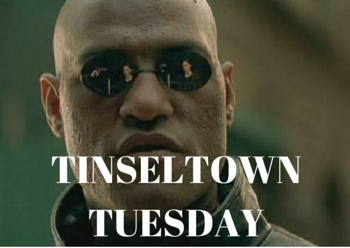 Why is this cheap, terrible trailer from a movie that was never released 8,594 times more entertaining than a modern film, released in 2015 with a huge marketing campaign and enough CGI to turn your Toyota Camry into a silver Aston Martin with an ejection seat?

1) This trailer is so bad, it circles back to good

It’s insanely bad enough to turn into a cult classic, the kind of thing where people dress up in horrible costumes and sing along to the bad dialogue.

This trailer alone could give birth to 29 different drinking games. Think of 120 full minutes of this on a big screen. We’re talking comedy gold.

2) The special effects are extra-special

Put another gun to the other side of my head and I’d say they borrowed the 2nd unit special effect apprentice for the Star Trek series. You know, Assistant Prop Master for Styrofoam Boulders and Green Lizard Alien Masks.

But no, this was made in 1994, when the art and science of special effects had already given us STAR WARS (in the ’70s!), ALIEN, TERMINATOR 2 (liquid metal! Come with me if you want to live!) and JURASSIC PARK (lifelike dinosaurs!). So yeah, you have to try hard to be this bad.

3) It jumps the shark, then dives into the ocean and rides that shark all the way to Loony Land

Everything you see violates seventeen different laws of screenwriting, dialogue, storytelling, cinematography and acting. This thing is amazing.

My favorites: (a) the CU of Dr. Doom’s gloved fingers doing the “I’m a diabolical villain” dance, (b) the Invisible Woman turning invisible right before minions smash into her, except she’s invisible, not a ghost, so they should’ve still smashed her and (c) the random man with a hat and eyepiece who thinks this movie is Shakespeare and recites the deep, deep dialogue in the grandest possible way.

I want that Shakespeare man in more movies, because every good villain needs a minion that, instead of shooting people, tries to make grand statements about profound things. Reminds me of the announcer character in MAD MAX: BEYOND THUNDERDOME who kept saying things like “Two men enter, one man leaves” and “Break a deal, face the wheel.” Beautiful. Somebody find the man in a hat.

And that’s the whole point of a trailer, isn’t it? Teasing you. Making you want more.

Raise your hand if you’ve been in the local megaplex lately, or flipping through YouTube, only to see a trailer that seems to last for fifteen minutes and gives every twist of the plot away.

Yeah. Happens all the time. They gave away the big surprise in the trailer for the latest TERMINATOR movie, and when that didn’t satisfy their inner spoiler, they splashed that plot twist all over the poster for the movie. I believe the director of that film is in jail now for punching five different studio execs.

This trailer, now, is confusing. Can’t really predict the plot from it. In fact, I bet you’d couldn’t you’ll fully understand the plot of this classic without watching it three times with a yellow legal pad to take notes, then tracking down the screenwriter to find out the exact drugs he was taking in 1994.

It’s a brilliant piece of trash, wallowing in its pure trashiness, and to whatever studio has this unreleased movie, please release it. I guarantee more people will pay to watch it than the current FANTASTIC FOUR flop.

Note: No, I haven’t watched the new movie. Not gonna do it. Wouldn’t be prudent. After every living critic spat upon it, kicked it to death and set it on fire, I took that as a sign. You couldn’t pay me enough to watch it. Okay, that’s a lie. I think $985 might do the trick, and I’d go as low as $817 if there was dinner and drinks beforehand. But no lower than $817. Life is too short.